.The Minaret is built for three purposes: Azan, Light and a clock for indicating the times of prayer

The construction of the Minaret of the mosque which are not based on facts. Real facts have been concealed. Therefore I have to submit the following: (1) The construction of the Minaret of the mosque is for the performance of the religious duty of Muslims and for the good of the public, as is clear from our Ishtihar. (2) It appears that most of the complainants…whose names have not been intimated to me, nor have their complaints been shown to me…or their leaders are Hindus, who naturally hate Muslim mosques and places of worship. (3) Some of them are such as have been convicted and punished either in cases started by my brother and father or due to their own aggression and violation of the law. (4) Some of them, like Imam Din and Nizam Din, are people who have borne enmity towards me and my community from the very beginning

They are always raising obstacles in the performance of our religious duties. A short time ago they raised a wall in the lane which leads to the door of my mosque to block the way. It caused great inconvenience to me, my guests, my followers and the general public. It resulted in a court case which dragged on for about a year and a half; and it was only after heavy expense that the Court at last decided against them and the wall was demolished. They keep on trying like this. The Hindu complainants in this case sided with them and appeared as their witnesses. Now too they are in league with them. (5) Hindus are not required by religion or custom to observe Purdah. Government officials all know it. On the other hand, the civilised societies of Hindus regard Purdah as an obstacle to progress. (6) The residential houses of some of the complainants themselves are so high that they interfere with the privacy of other people’s houses…houses of people who observe purdah by religion and custom and are acknowledged as purdah observing people. By way of an illustration I refer to the house of Shankar Das which is next to the mosque. You may go on its roof and see. (7) The mosque Minaret will not be like a residential house. It will be a tapering pillar, which is being built on religions principles for the good of the public, as is clear from the Ishtihar. A big clock will be fitted at the top to tell the people the times of prayer; and there will be a big lamp for light which will help the workers employed for the protection of the inhabitants. (8) The protection of the clock and the lamp naturally requires that it should remain closed except at certain times, viz. for the purposes of Azan, lighting the lamp and winding the clock. When the height of residential houses (where people actually live) does not affect purdah, how can it be interfered with by the construction of the Minaret? (9) The mosque Minaret is being built on ground which I own and possess, and it is a part of the mosque without which the mosque remains incomplete and defective. To stop building a mosque is stopping the building of a religious place of worship and that is an attack upon religious freedom, which is the right of every individual subject of the British Government. (10) The construction of the Minaret commenced a long time ago. Its Ishtihar was issued three years ago, giving its site along with a detailed account of some other buildings of the mosque. To put a complaint before the authorities against it after three years is based only on enmity. (11) About Rs. 4,500 have been spent on the construction of the Minaret

To postpone its construction now for some future time is not only an insult to our religion but it is also a financial loss to us. (12)Wherever there exist magnificent mosques their Minarets are more or less attached to them throughout India. Nowhere are they separate, nor can they be separated. No objection has ever been raised against them up till now. On the other hand, during the term of Lord Curzon they have been duly respected and honoured apart from their supervision and protection. Hence opposing the construction of this Minaret only betrays personal malice, (13) Custom is regarded as part of law. There is no instance at all where the building of religious places of worship has ever been unduly stopped. Even residential houses are not stopped merely on the ground that they are high. Accordingly, the new towns founded by the English, like Montgomery, Abbottabad, Lyallpur etc., do not have all their roofs on the same level. Nor is such a thing possible. (14) There is caused a misunderstanding by saying that the public in general is displeased with it. How can a Mussalman be displeased with a mosque and the construction of its minaret? Hindus not only here but throughout British India can never be pleased with the construction of mosques on account of their religions’ differences. Therefore no notice should be taken of the displeasure of the opposite party (15) Mosques and their minarets are pillars of religion which are properly respected and honoured even by the Government. When the observance of ordinary customs devised by common people themselves is not interfered with, how then can religious matters and their enforcement be interfered with? It may be further added that to say that the mosque Minaret is going to be a place of amusement for sightseers is an insult to the mosque and an insult to our religion. A mosque is not a place of amusement. The Minaret is built for three purposes: Azan, Light and a clock for indicating the times of prayer. Mosques are the places of worship, to call them places of amusement is an insult and deception. To turn mosques into places of amusement is a sin with us 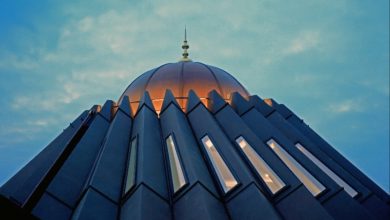 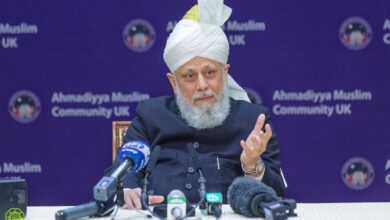